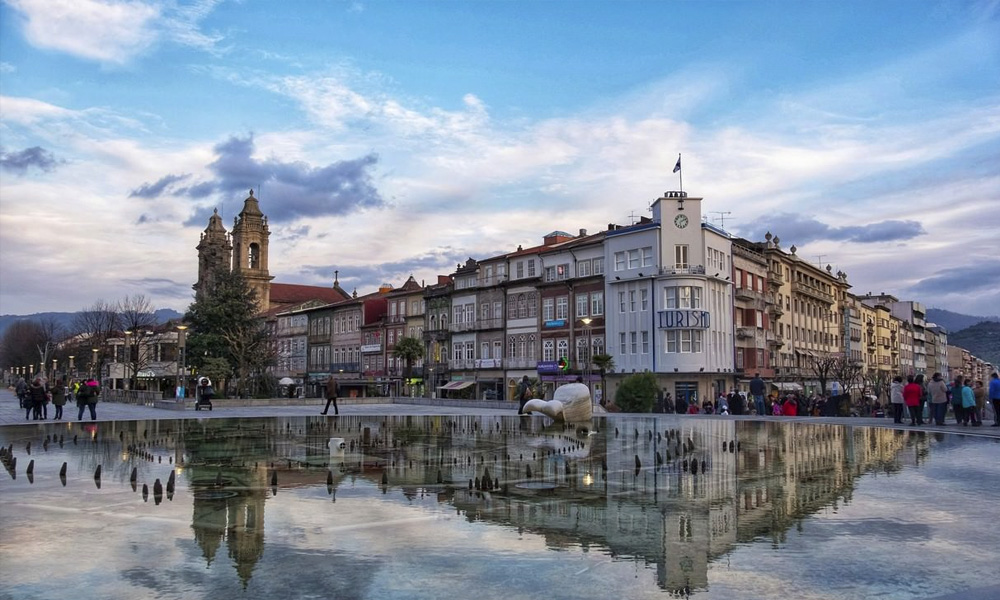 The “Braga Romana” event fills the streets of Braga every year to recreate the ancient times, to the delight of locals and visitors.

According to a study conducted by the Eurobarometer on the quality of life in European cities, 97% of Braga’s residents are satisfied living in their city, which makes Braga the happiest city in Portugal and the third in Europe.

The Portuguese city is in third place ex-aequo with eight other European cities, including Hamburg, Stockholm, Munich, and Málaga.

Regarding health care, Braga is the second Portuguese city with the most satisfied citizens (52%), with only Lisbon (59%) in front of it.

2. The “Quarry Stadium” with international awards

Braga Municipal Stadium is home to Sporting Clube de Braga, who plays in the 1st division of the Portuguese Football Championship

Known as “A Pedreira”, it was designed by the architect Eduardo Souto Moura and engineer Rui Furtado, from Afaconsult. The stadium was built for the Euro 2004, which took place in Portugal.

This was a project of innovative architectural lines with only two side stands and 30,000 seats. On one side the stadium, part of the old quarry is still present, and on the other side, there’s a wonderful view looking of Braga’s valley.The stadium’s roof design is inspired from bridges built by the Inca civilization in Peru.

This fantastic work was awarded the Secil Prize in 2004 (Architecture Category) and 2005 (Civil Engineering Category). This award draws recognition to the most remarkable works of architecture and engineering.

In June 2011, the architect Eduardo Souto Mouro received the Pritzker Prize – the most prestigious architectural award in the world. The award was granted in Washington, United States, and, during the ceremony the Stadium was highlighted by the jury and praised by the President of the United States at the time, Barack Obama.

3. The Abbot of Priscos’s culinary skills

Abade de Priscos pudding includes ingredients such as porto wine and bacon, making it so special

The story recounts that the Abbot of Priscos – Manuel Joaquim Machado Rebelo of his name – was known in the parish of Santiago de Priscos for his great ironing, sewing, and embroidering skills.

But what he was truly famous for were his culinary skills; he was considered one of the greatest cooks of the nineteenth century. He owes this reputation to his most famous culinary masterpiece, the Abade de Priscos Pudding, which is still included in most of Minho’s restaurants’ menus.

There many stories about the way the Abbot, through unparalleled skill and perfection, turned his meals into pure magic. Described as an explosion of flavours, they were said to be the product of a panoply of spices that the Abbot kept in his secret bag.

An example of this is an episode that occurred on October 3, 1887. On that day, the Abbot of Priscos was prompted to prepare the royal banquet at Póvoa de Varzim, which King Luís and his family were going to attend. The Abbot’s performance was so exceptional that the King requested to meet him and know the composition of that delicious and unique dish.

The Abbot, with an unexpected response, smiled and said, “It was straw, royal Lord!”

This triggered the astonishment of everyone present and the King’s incredulous question: “Straw? So you give your king straw? ”

Again, mysteriously, the Abbot clarified: “Majesty, everyone eats straw, it’s all about the way it is served…”.

Can you find the 3 roosters on the facade of the Santa Cruz Church?

The legend says that there are three roosters on the baroque façade of the Church of Santa Cruz, and if a single girl finds them, her marriage will soon be secured. However, it’s not as easy as it seems. While the first two roosters are easy to find, spotting the third one is an “Einsteinian” puzzle. The process can be lengthy and even frustrating, but this difficulty is seen as a prerequisite for marriage.

Another curious tradition in Braga involves the statue of São Longuinho, in the Sanctuary of Bom Jesus and São João. Longuinho was a wealthy farmer with a great reputation who, despite many young maidens fell in love with him, was deeply in love with Rosinha, whose heart already belonged to another man. The girl’s father promised her to Longuinho despite this and Rosinha prayed and appealed to São João for a miracle.

One day, a voice whispered in Longuinho’s ear that he should show compassion for the girl’s happiness. The farmer agreed and even offered to be the couple’s godfather. Longuinho’s figure is represented in the statue of São Longuinho, symbolising altruism and the triumph of true love – against everything and everyone.

During the feast of São João, many single girls walk around the statue of São Longuinho in Bom Jesus while uttering prayers to hasten their marriage.

5. The city that named the days of the week

The days of the week in Portuguese are very different from other languages.

Have you ever wondered why the name of the weekdays are so different in Portuguese than in any other language? Monday (in English) or Lunes (in Spanish) means “moon day”. But in the Portuguese language, it says “segunda-feira” (which literally translates to “second fair”). This was implemented by the former bishop of Braga, São Martinho de Dume, who, in addition to changing the name of the days of the week, also wanted to change the name of the planets.

São Martinho, following the influence of the Catholic Church and fighting Roman paganism in known nomenclatures, replaced the old Roman names with days that were to be devoted to liturgical feasts.

Thus, at First Council of Braga, it was decided that in the region, the days should be termed as: Dominica dies (day of the Lord), Feria Secunda (second fair), Feria Tertia (third fair), Feria Quarta (fourth fair), Feria Quinta (fifth fair), Feria Sexta (sixth fair), and Sabbatum. In Latin, Feria (fair) had the meaning of Feast (in this case, liturgical feast, from which the name Feriado – the Portuguese word for “Holiday” – came).

For this reason, the region of what later became Portugal started following Braga’s tradition of church-modified weekday names follow.

Over the years and through the development of the Portuguese language, the word Feria was replaced by the word Feira, because Feira was the day of the market. Thus, the names of the days of the week in Portuguese have been modified: Domingo, Segunda-feira, Terça-feira, Quarta-feira, Quinta-feira, Sexta-feira, Sábado.