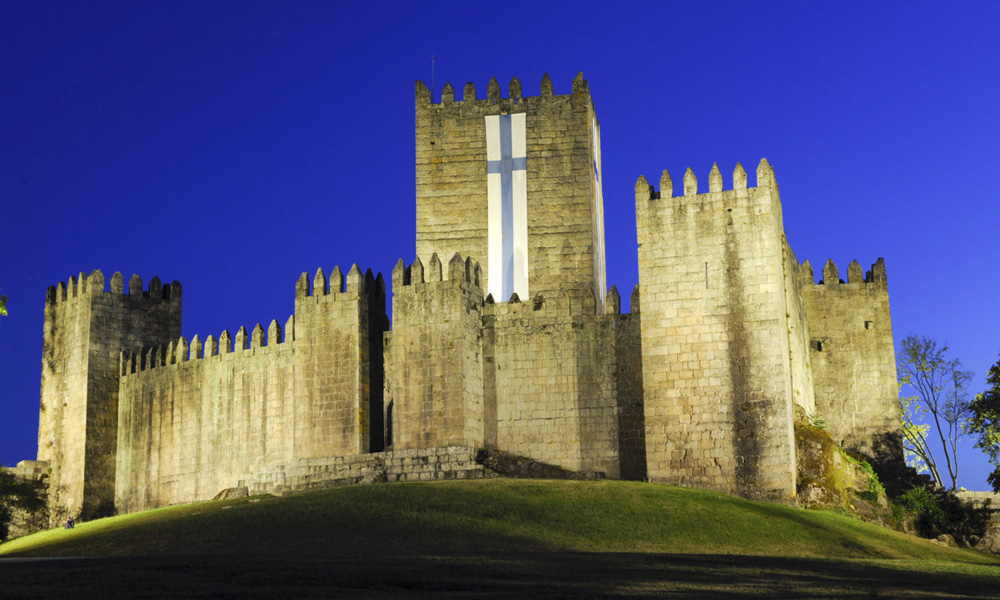 The Birthplace of the Portuguese Nation (Background)

Guimarães: where the history of Portugal begins. Birthplace of the young Count Afonso Henriques, from where he left in search of a kingdom, to conquer Christian territory and widen his county’s borders. Historically associated with the establishment of Portuguese nationality and identity, Guimarães preceded and prepared the foundation of Portugal, which is also known as “The birthplace of the Portuguese Nation”.

Guimarães was built by the Countess Mumadona Dias in the tenth century and was intended for defence of the territory. The wall of Guimarães had eight doors and surrounded Vimaranes, the village that later became Guimarães. Within these walls, the village remained unchanged for centuries, but beyond the fortifications, it expanded and grew under the establishment of religious orders and population growth.

In contemporary Guimarães, history is encrypted in the city’s streets and the heritage is very well preserved. The iron balconies, granite front porches, the manor houses, arches connecting the narrow streets, smoothed floor slabs of the years, and the towers and cloisters carry us through time. For a moment, the medieval scene forms and we feel this unique atmosphere as if we were part of the Nobility.

The historic centre is still full of life, with layers of time living on the balconies, with clothes hanging, on the treasured façades, and houses filled with memories. The hubbub from coffee talk and the bustle of children fill the human frame, made of inhabitants that still live in those houses with granite walls, wooden doors, and wrought iron balconies.

Granite, wood, and iron. These were the raw materials used for the restoration of public space. In Guimarães’ historic centre’s exemplary recovery, traditional construction techniques were used, and residents were an integral part of the process. This intervention’s rigour earned several distinctions from national and international institutions.

In 1853, Dona Maria bestowed the status of City to Guimarães, but this status was conquered by Vimaranes’ people over the centuries. An important status that Guimarães boasts is to be the home of two national treasures, with many stories around them: a golden silver triptych offered by D. João I, in appreciation to Santa Maria of Guimarães for the victory in the Battle of Aljubarrota; and a loudel, a military garment made to protect the King’s body from the armour’s harshness and enemies’ blows.

This city is modern and lives side-by-side with its historic centre, where people circulate, becoming an integral and authentic part of the collective memory. It’s an urban complex that has embraced history and modernity and, since 2001, earned the classification of UNESCO Universal Heritage.

More than the historic centre (Challenge)

Given this strong and unique historical legacy, the Guimarães’ Town Hall joined forces with Bloom Consulting to understand the Municipality’s reality and define the positioning of its City Brand in tourism attraction. Thus, for the development of the strategy, in the first phase, an extensive research phase was carried out by elaborating studies with the purpose to understand internal and external perceptions of the municipality.

There are perceptions about Guimarães and they are aligned with reality. And both in the internal perceptions as well as in the rest of the country, we realize that there is a prevalence in the themes related to the Foundation and History of Portugal. Those who visit this territory for the first time, especially local stakeholders, get an extremely positive feeling, but not always a unique experience.

In fact, Bloom Consulting detected some obstacles in Guimarães’ City Brand: short stay in the Municipality, tourist concentration in the city centre, loss of notoriety with young people, and the aforementioned lack of recognition outside Portugal.

“These are the obstacles that we propose to tackle with this strategy, attracting more people to the municipal territory of Guimarães, and transmit this Vimaranes’ determination, with the pride we have in our history, with the unique way we receive those who visit us. But also, with the spirit of unity that leads us to defend what is ours, which is the territory that we have always been taught to love, and of which we are proud,” says Domingos Bragança, Mayor of Guimarães.

Valuing and preserving sentiment of uniqueness for the territory (Strategy)

As recommendations, Bloom Consulting identified the need to unify the territory of Guimarães and complement the existing experience. In addition, communicating more and better to change the paradox that Guimarães is just about the Castle and the Palace of the Dukes, in order to address the issue of concentration in the historic centre and short stays.

Bloom Consulting felt it was just as important to diversify audiences through smart segmentation, creating specific actions and activities to gain greater awareness among young people, and combat cross-border ignorance.

“The connection between the city and the audience cannot be lost: it is important that they come back or that we make them come back,” said Filipe Roquette, Director of Bloom Consulting in Portugal during the public presentation of the Tourist Strategy in September 2019. “Vimaranes’ people should act as a kind of ambassador of Guimarães inside and outside,” he said, stressing the “importance that the immersion in Vimaranes’ spirit has in attracting tourists, being the localism, for example, one of the differentiating points of the city.”

Exploring the potential of stakeholder engagement and taking advantage of local pride were other key points to consider, as well as aligning the strategy with a coherent vision for tourism through a Central Idea that defined Guimarães Municipality’s City Brand.

Hence, Bloom Consulting gathered a local team and launched the challenge of finding what Guimarães represents! Combining the symbolism of a territory with a rich historical heritage, with the bravery characteristic of its foundation, it is the heart, the sense of belonging, and the unbridled pride that stand out. The rapture, enthusiasm, and exacerbated way of living in Guimarães is the exact identity that distinguishes this people from the rest of the world. An essence only found in this Minho Municipality.

The Vimaranense Determination (in Portuguese, ‘Garra Vimaranense’) embodies the authenticity and hospitality, the conquest and perseverance, the passion and defence of those who experience and honour the glories of this unique territory. What is special about Guimarães is the people!

Pride of history. Historical weight has always been a gravitational force contained within the walls of the Castle and the Historic Centre. Being from Guimarães, where Portugal was born, is a pride transmitted from parents to children and is an encouragement to face any difficulty. As in Guimarães everyone knows, it was because there were Vimaranense people that, later, there could be Portugal.

The Ultimate Host. People feel good in Guimarães, they feel at home. Those who visit this county leave there with a great sense of belonging and a great desire to return, the people from Vimaranes are the perfect hosts and master the art of receiving like no one else.

Participate actively. At times, when it is necessary to represent Guimarães, citizens defend their ancient land with one voice. Everyone wants to take part; the union is made of one body and spirit. Community is the watchword, with no room for indifference.

Love the territory. From an early age, the people of Vimaranes were taught to love their land and the history it fosters – the undisputed cradle of nationality. Every corner and every nook of the squares and facades have a special meaning for each native of Guimarães, which will be preserved from generation to generation.

All these behaviours are mirrored in three main programs.

1. IDENTITORY PROGRAM. The main objective of this program is to develop, expand, and disseminate the Vimaranense Determination, ensuring the future of this spirit of identity through the young, who connect with tourists and even those who have just arrived in the region. This immaterial asset that represents the identity of Guimarães is an inextricable part of the Municipality’s vision and projection.

Within this program there are three projects: Bases of Identity, Identity Representation and Projection of Identity. Each one has more subprojects.

2. TERRITORIAL VALUATION. A program focused on turning the whole of the Vimaranense territory into a reflection of identity, vision, and high expectations. The Vimaranense Determination shows its maximum exponent in the defence, preservation, and experience of its territory. The distinctions and honours that the city often receives are not a fluke, but a consequence of constant meritorious work. Thus, this program is based on the principle of continuing to perfect Guimarães, without decoupling the identity of the territory.

This program includes another three projects: Unified Territory, Guimarães Verde and Determination in the Territory. These projects are also divided into more subprojects.

3. GET TO KNOW GUIMARÃES. A program that offers a range of experiences that reflect the monumentality of the territory and Vimaranes’ people. The humanization of the tourist experience is a losing game for many modern destinations. In Guimarães, however, there is willingness from the population to be part of the destination, to show, help, and participate. With this “Determination” and for this reason, all projects related to the tourist experience will include the Vimaranes’ people’s participation.

Finally, this program has six projects: Tailor-made, Discovery of Origin, Green Visit, Immersion in the Spirit of Vimaranes people, Passion Path and Accompanied Experiences. Once again, these projects are divided into several subprojects.

1 Strategy, 3 Programs, 12 Projects, 48 ​​Subprojects, 158,124 Vimaranense people. These are the numbers that will build the future of Guimarães.

From theory to practice (Implementation)

From Vimaranenses to young people, to foreign visitors, Bloom Consulting’s tourism strategy for the Guimarães City Brand recommends focus on these target audiences.

The inhabitant of Guimarães will be the most important component of this strategy, as their determination will be the driving force of all projects. It will be the natives of this great city that will make national citizens, Portuguese-descendant citizens, and the Portuguese diaspora see this land’s personality.

The younger age groups are the ones that are most resistant to Guimarães’ messages, so the messages must be adapted to show a modern and innovative destination. Moreover, to make Guimarães known to foreign markets, with an emotional and meaningful concept for those who have no connection to Portuguese origins. Bloom Consulting believes that expanding international demand is fundamental.

For the implementation phase of the strategy, the creation of a team composed by Guimarães City Council, associations, locals, and Vimaranense actors should make all the aforementioned projects a reality. And a Management Platform will ensure periodic analysis of the status and results of each project.

A new chapter is now being written, but it doesn’t go into Portuguese History books. It is a chapter that goes far beyond a tale that begins with “Portugal was born here…”, it goes beyond the Castle walls and the Historic Centre. It is a chapter told in the first person, by each Vimaranense person, all together, with one voice, with one identity. An identity that transmits all the emotion, dedication, and enthusiasm, that only Guimarães holds. With Vimaranense Determination!

“With this strategy of Bloom Consulting, we intend to overcome the obstacles and attract more people to the municipal territory of Guimarães, envolving them with this vimaranense determination.”