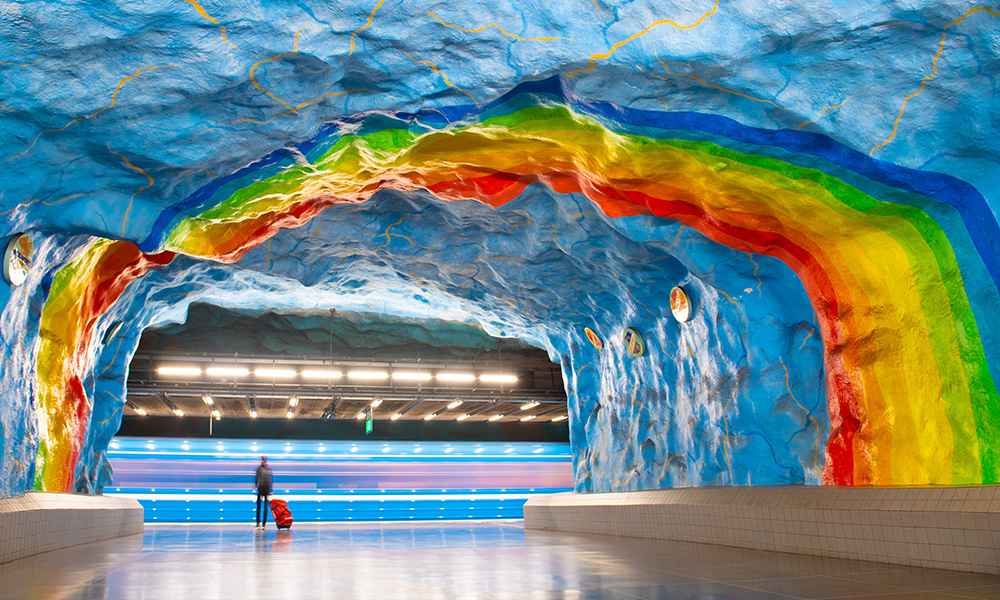 Stockholm is the largest city in Sweden and its capital since 1436. It is located at the junction of Lake Mälar (Mälaren) and Salt Bay (Saltsjön), which forms an inlet of the Baltic Sea, opposite the Gulf of Finland. The city is built on numerous islands and the territories of Uppland and Södermanland. Because of its special geography, Stockholm is considered as one of the most beautiful capitals in the world.

The name Stockholm comes from the words ‘stock’ meaning ‘tree trunk’ or ‘fortification’ and ‘holm’ meaning ‘islet’, referring to Stadsholmen, the central area from which the city emerged, although it is not known exactly how it received this name.

Some claim that the Vikings tried to determine the location of their new colony using a tree trunk tied with gold, while others refer to the floating trunks that led to the waters arriving near the Old Town.

First referred to as a city in 1252, this fishing village grew rapidly thanks to a trade agreement with the German city of Lübeck. And after many years of conflict between Danes and Swedes, Stockholm was liberated from the Danish rule by Gustav I Vasa in 1523.

In the mid-seventeenth century, Stockholm developed considerably when Sweden temporarily became a world power. The old city walls were torn down, and new neighbourhoods grew to the north and south of the ‘city between the bridges’.

In the 18th century, fires destroyed much of the city and old wooden houses were replaced by stone buildings. Stockholm has since become the cultural centre of Sweden, with many of its literary societies and scientific academies dating back to that time.

A new period of development began with industrialisation in the 19th century, and the introduction of municipal cleaning and sanitation contributed to a rapid population growth.

During this time, the reconstruction was carried out in the medieval core of the city, rebuilding buildings, avenues, avenues, and parks, and many of the current schools, museums, libraries, and hospitals of the city. Many suburbs and satellite cities developed later.

Stockholm is the main industrial area of Sweden, it fosters metal and machine manufacturing, paper and printing, food, and chemicals. It is also the main retail centre in the country and serves as headquarters for many banks and insurance companies.

Stockholm is also Sweden’s second-largest port (Gothenburg is the first). The many national government offices are a major employer in the city, as well as various educational, scientific, and cultural institutions.

Working weeks of 40 hours, a minimum of five weeks of holiday a year, 480 days of parental leave, clean air, and nature around the corner are some of the reasons why international talents are attracted to Stockholm.

Free education and a highly qualified population with access to business incubators means access to national talent. Openness to new ideas, a culture of sharing, a start-ups-enhancing ecosystem, and an excellent social security system enable and foster creativity, entrepreneurship, and innovation.

With values such as flat hierarchies, gender equality, and ethnic diversity in the workplace, it is no wonder that this northern European city is at the heart of technological innovation and is one of the world’s largest clusters of start-ups. And with unicorn companies such as Spotify and Skype, or global references like IKEA, no need for presentations.

Even with just six hours of natural light in winter and 18 hours of sunshine in summer, Scandinavian designs on cobblestone streets seem to come out of a fairy-tale. Otherwise, the 73 square miles stretching over islands and hills wouldn’t be nicknamed the Venice of the North.

Visit Stockholm, along with its parent company Stockholm Business Region, has contacted Bloom Consulting to create a support programme for City Brand Partners. The objective was to bring together different stakeholders in a new partnership model that would develop the city’s offer for visitors, investors and companies, in line with the shared City Brand vision that is the DNA of Stockholm.

The project initially involved quantitative and qualitative research, the results of which were presented during various workshops held in 2018 to stakeholders, Visit Stockholm, Stockholm Business Region teams, as well as municipal representatives.

The DNA of the City of Stockholm Brand has three basic identity concepts. The first is to be Visionary, a creative city that dares to dream of a better future, never letting itself be anchored by the status quo, always thinking outside the box, and always having security and freedom to innovate.

Being Trustworthy is the second: the city is built on the transparency of public institutions and a social support system based on an ancient democracy, and an atmosphere of trust in society and among individuals.

Being a city of equality that never compromises freedom of expression, religion, or sexuality, is synonymous with being Free, encouraging self-thinking, difference, and defence against oppressive systems.

Achieving this shared vision of the goal – to achieve recognition of Stockholm as the most creative city in the world –, the mission of spreading the unique DNA as the recipe for the atmosphere of creativity and success, and the positioning of the City Brand as the Capital of Scandinavia were the goals of Visit Stockholm and Stockholm Business Region.

As far as Place Branding is concerned, “the important thing is not the logos or slogans, the focus should be on planning, delivery and how to tell the stories”, as Bloom’s president, Malcolm Allan, says, being directly involved in this project.

Thus, for the creation of the strategy requested from Bloom Consulting as a way to contribute to these same objectives, we took into account the results of the 6.2 million surveys conducted on Stockholm, between March 2017 and February 2018, measured by our Digital Demand – D2© software.

According to the data collected, the Swedish capital is seen as a politically stable and secure city, with no evidence of the impact of the terrorist attack it was recently the target of on its reputation.

In terms of Tourism, Stockholm is perceived as a vibrant and cultural city; from a Business perspective, it is very well-positioned to attract entrepreneurship, cutting-edge technology, and investment; from a Talent perspective, its university and job opportunities are key players in attracting talent.

Overall, the attractiveness of the Stockholm City Brand is booming in the dimensions of Tourism, Investment, and Talent, being most demanded by the German, American, and British markets.

Subsequently, in order to build a stakeholder partnership brand for Stockholm, we identified the key stakeholders, defined roles and responsibilities, appointed architects and brand ambassadors.

“Bringing stakeholders together and discussing what needs to be done is extremely necessary. This is the only way to coordinate efforts to promote and improve the City Brand“, says José Torres, CEO of Bloom Consulting, one of the managers of the Stockholm project. “The strategy was already developed, our role was to create and recommend the conditions for it to work“, he reinforces.

In fact, qualitative assessments of the city’s business perceptions were carried out based on several interviews with senior entrepreneurs from different sectors of the Swedish city’s economy.

Through these interviews, it was possible to understand their knowledge of the city’s offer, awareness of the brand strategy, the challenges it faces, the improvements to be applied. and their willingness to invest in projects that will make the brand’s strategy to be the most creative city a reality.

Finally, we obtained significant data when comparing Stockholm with other major European capitals, such as Berlin, London, Barcelona, Amsterdam, and Vienna, among others.

The final delivery of Bloom Consulting was a support system for Visit Stockholm and its stakeholders for the future development of the sector – with a focus on providing marketing intelligence, stakeholder management, and brand alignment.

The recognized focus on sustainability (Results)

In the recent years, the city of Stockholm has been working on the basis of a unifying vision for its future. With a common vision, all the city’s administrations and businesses have a common thread, in addition to the laws and guidelines that guide their own operations.

The vision provides a necessary strategy to better develop Stockholm so that it remains a fantastic city to experience, live, and work in. The world is constantly changing, and Stockholm is going along with it.

Based on knowledge of global trends and structures that are important to the conditions and challenges of the region and its characteristics, the vision is duly revised.

Together with the already-established strategy, Stockholm City Council has decided to take steps to make the city the smartest and most connected city in the world, with a special focus on sustainability – Vision 2040. The aim is to make Stockholm more economically, ecologically, democratically, and socially sustainable through innovative digital services, transparency, and connectivity.

An example of this was cancelling the Stockholm Fashion Week in order to influence the global fashion industry to adopt more sustainable practices at the Sustainable Fashion Forum, presented by the Swedish-American Chamber of Commerce.

“If the industry has the opportunity to survive alongside the planet, it should be disruptive. To make the transformation towards becoming sustainable, the industry needs support, new tools, and platforms across sectors,” said Jennie Rosén, CEO of Swedish Fashion Council.

Inclusive, sustainable and thriving initiatives were considered key for the jury’s decision to name the swedish capital as Smart City of 2019. Stockholm was said to have a strategy to create a smart and connected city, via innovation, openness and connectivity, which provides the highest quality of life for residents and the best environment for business.

Stockholm leads the planet in most recent Sustainable Cities Index, thanks to investment in sustainable infrastructure, low emissions, and good air quality, which proves that it is succeeding in combining economic prosperity with environmental management.

In 2010 already, Stockholm was elected the first Green City in Europe. Around 10% of the city’s area is water, many of the lakes and reservoirs are used for recreational purposes, and 95% of the population lives only 300 metres from green areas, thus increasing welfare activities, water purification, noise reduction, improved biodiversity, and ecology.

The city aims to be fossil energy-free by 2050 with its Decarbonization Plan, like Costa Rica, and its work has already been recognised several times, for instance, the “Clean Transport” award granted by CIVITAS in October 2019, a European Union urban network dedicated to greener transport, for its progress in low- and zero-emission vehicles, and for safe cycling and walking routes for citizens.

This will be a challenge for the city that will be interesting to observe: how it will balance all this with ecological responses and adopt a sustainable tourism.

“What makes Stockholm so special? Bloom Consulting facilitated an important process that brought stakeholders together to embrace our unique DNA and pushed us to a new level of trust.”