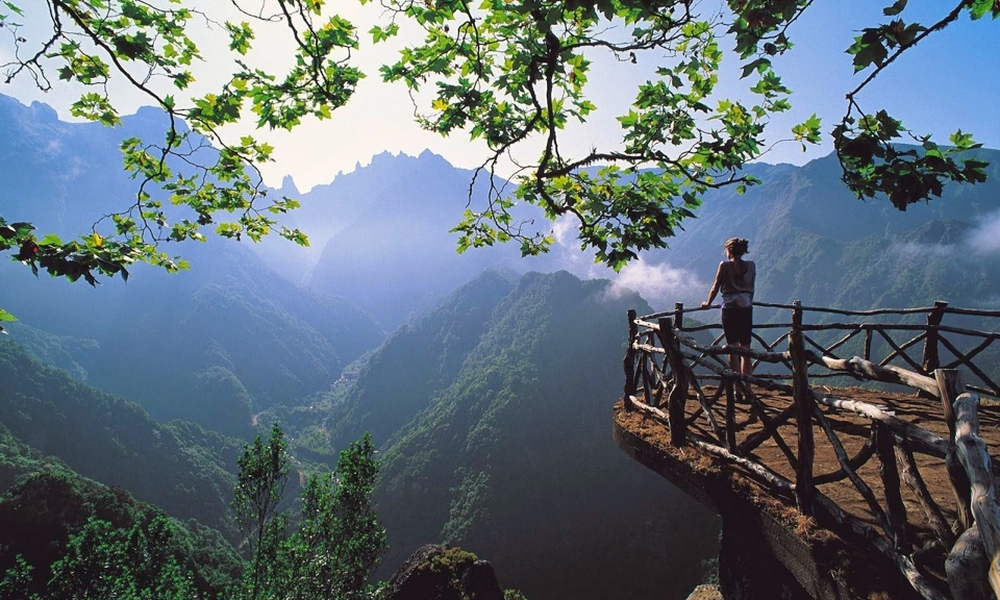 One of the oldest tourist destinations in Europe (Background)

The Madeira Place Brand can be only be understood through a visual and sensorial description of the land and its people. Madeira is the starting point of an immense sea, the Madeira region has paths that open up to the world without walls or borders. Known as the eternal pearl of the Atlantic, where the blue of the ocean merges with the blue of the sky, this island destination is not only a stopping point between Africa and Europe. Standing as one of the oldest tourist destinations in Portugal and the Old Continent, innovation has become a core pillar to maintain their touristic appeal.

Thanks to its climatic and prophylactic qualities, Madeira Island became the first and main therapeutic resort in Europe in the 18th century. It became, over time, a meeting point for poets, writers, politicians and aristocrats. Among its distinguished visitors is Winston Churchill, the celebrated British Prime Minister, who spent his holidays in Madeira with his family in January 1950. Churchill even went to Câmara de Lobos where he painted a picture of the bay and the islet in the viewpoint later named after him, thus leaving profound marks on the region’s tourism.

Formed by two main islands – Madeira Island and Porto Santo Island – and two groups of uninhabited islands – Desertas and Selvagens Islands – the archipelago has as its capital the cosmopolitan city of Funchal, one of the most expressive sides of the European character of the Madeiran region. Together with the Levadas, the Laurissilva forest, the capes, the mountains and the sea make this territory privileged and unique with its richness, diversity, and limited only by its geography.

The land was named after its rediscovery by navigators Joao Gonçalves Zarco and Tristao Vaz Teixeira in the 15th century given the abundance of raw material (madeira/wood). It’s potential unlike any other destination in the world and is recognised both internally and externally. In addition to the Municipality of Funchal occupying the 3rd national place in the Visiting dimension of the Bloom Consulting Portugal City Brand Ranking©, Madeira also has several international distinctions awarded over the years, such as the “World Leading Island Destination” by World Travel Awards received consecutively since 2015.

Today it is one of the most prestigious tourism regions in Portugal, attracting more than one million national and international tourists every year.

From Madeira to the United States (Challenge)

Masters of the art of hospitality, the Madeirans have welcomed the Bloom Consulting team with open arms since our first project, sharing with us the best of their region. This exceptional welcome makes us feel like this is our second home that we want to return time and time again. Even between meetings and tight schedules, we cannot resist a detour along the way to try another delicacy or to enjoy the green landscapes.

The strong relationship between the Bloom Consulting team and local organisations, of which the Madeira Promotion Bureau naturally stands out, was built in the same way. The bond has been built over the last few years, reinforced on every trip, conversation and experience we share together.

The various new and continual projects that have been carried out in partnership with the Madeira Promotion Bureau since 2017, enhances our team’s understanding of the reality of Madeira and its inhabitants. All projects were born out of the admirable union between all entities and personalities in Madeira and the desire they have to manage this tourist destination in an innovative and distinct way, with a focus on relevant information and exclusive data.

Over the past few years, Bloom Consulting has evaluated the evolution of the existing demand for tourism assets, activities and other points of interest in the Madeira region in about twenty specific markets, as well as its position amongst main competitors through proprietary software – Digital Demand – D2© and Digital Supply© – to carry out a thorough diagnosis of the status of the Madeira Place Brand.

In addition, Bloom Consulting pioneered specific studies for Madeira, such as World Travelers, where new ways of characterising and drawing a more complete and interpretive profile of tourists from the target markets that were developed. This provided relevant information to the Madeira Promotion Bureau and its associates, the Regional Government, local entities and partners allowing for a greater rate of success for the destination and its constituents.

More recently, we challenged the Madeira Promotion Bureau to incorporate an internal system that redefines how the destination can be information-based: the creation of an intelligence centre that will later be open to all local actors, in terms of access and implementation of information. This action calls for a more advanced index of knowledge shared by the entire Madeira Promotion Bureau team, as well as all stakeholders and local actors, who now have digital tools, methodological solutions and shared information available for a more complete involvement with Madeira’s strategy.

Together, with the knowledge acquired through the data collected by all the studies provided by Bloom Consulting, this new way of working led to what we believe to be the most complete and detailed study that a Portuguese tourist region has ever carried out to better understand a specific target market. We are referring to the “Positioning of Madeira destination in the US market” project.

The objective was to develop a comprehensive study of the characterisation of the North American market and tourist that put forth a brand positioning and marketing plan in addition to making the necessary tools available to evaluate the positioning of Madeira and its potential for attraction to this specific market. This study would result in a set of measures and the identification of the respective critical factors of success for strategic action to be taken. Given the desired results, Madeira Promotion Bureau opted, once again, for Bloom Consulting to be its partner in this project.

The importance of data analysis (Strategy)

The Madeira Promotion Bureau intended to rethink its strategy in the US market since, despite continuous growth, Madeira still did not grab the attention and have the notoriety to become a prominent destination in the minds and hearts of tourists from the United States.

Taking into account the purpose of the proposal and the identified needs, the Bloom Consulting team developed a holistic solution specially catered to Madeira. We believe that each strategy must be designed in a personalised and individual way to respond to the objectives and potential of each Place Brand.

With the collaboration of several entities, including the Government of Madeira, Turismo de Portugal and TAP Air Portugal, as well as the indispensable support of consultant Miguel Carvalho on the ground, specialist in tourism in the United States, the Bloom Consulting team packed up and left for a 20-day adventure on North American soil. They travelled 21,529 km, visited eight cities, from New York to San Francisco, and talked to more than 60 tourism professionals in eight focus-groups.

After this intense field study, Bloom Consulting dedicated itself to the complete assessment of Madeira’s current situation in the US market, where it was concluded that this Autonomous Region of Portugal still had little recognition. Something that Joao Vasco Neves, one of Bloom Consulting’s consultants involved in the project, does not see as an obstacle but instead potential:

“There may not be much knowledge about the Madeira brand in a market like the United States, but nobody is indifferent to the appeal of this region. During focus groups, it was enough to show images of the diversity of the landscapes with the contrast between the blue sea and the green mountains to see that people’s interest was immediate. You only need to know Madeira to want to visit it.”

The diversity of Madeira’s offer can provide enriching experiences to a range of touristic groups who perfectly complement those who are already visiting Europe. What Madeira has to offer; American tourists cannot find on the islands of their continent.

A Marketing and Communication Plan was developed based on internal and external considerations, highlighting priority actions to be developed which showed how all the entities involved could adapt to the needs of the destination in order to position it with the best brand strategy.

Prepare a brand for the present, thinking about the future (Implementation)

The initial challenge, as well as all the assessments that were added throughout the project, started with data analysis. The in-depth research allowed for the identification, mapping and understanding of the unique, relevant and sustainable attributes of Madeira’s Place Brand. It enabled a more complete view of the region, based on the monitoring of the United States market and the strategic recommendations of Bloom Consulting on how to stand out from the competition and position itself as a tourist destination of reference.

Although the implementation phase of this project is still pending due to the current situation of the COVID-19 pandemic, the Regional Government of Madeira, together with the Madeira Promotion Bureau and Bloom Consulting, decided to capitalise on all of the knowledge assembled over the years and throughout various projects to begin working on the Madeira Tourist Brand Strategy.

Anticipating that there would be difficult times given the global context, the entities responsible for managing this brand acted quickly with precise vision, aiming not only to create a brand that responds to a crisis but also a strong and cohesive brand that will endure over time with set of action plans capable of moving towards the future.

Although government entities and local authorities are promoting the containment of the coronavirus in an exemplary manner, registering a small number of cases, Madeira is grappling with the challenge of recovering one of the industries most affected by the outbreak worldwide, tourism.

However, this quick and strategic reaction to adjust and improve the management of its brand shows that Madeira is at the forefront in terms of current and future preparation. Faced with an unforeseeable scenario, like the one we are experiencing, it has determinedly moved forward with the project that will minimise the impact of COVID-19 on the Madeira region brand and on the local tourism industry.

The result from the relationship between Bloom Consulting and the tourism management entities of Madeira has proved to be very useful in understanding the importance of having a Place Brand based on data and information which allow for a better knowledge about internal perceptions, as well as positioning a stronger destination on the global scene.

Because, just as they welcome us with a unique and unforgettable hospitality on every trip we take to their territory, we want the Madeira Promotion Bureau to be one of the best DMO’s in the world, with all stakeholders and associates working side by side, so that this destination can increasingly offer visitors the opportunity to live the true and genuine Madeira experience.

“THE LONG PARTNERSHIP WITH BLOOM CONSULTING PROVIDED us with enough information to develop an INNOVATIVE VISION. WE ARE MORE AND MORE PREPARED TO AFFIRM WOOD AS THE WORLD REFERENCE DESTINATION IT IS.”